Creamed corn macaroni and cheese is the ultimate comfort food, and because this is a slow cooker recipe, it’s also the ultimate weeknight dinner! Most days, having a three year old is such a joy. My Baby can be such a sweet, easy going kid. When he’s in Charming Baby Mode, he is funny, clever, and most agreeable. You can’t help but do whatever he asks because he’s just so darn cute about it all. But then there are the days when Charming Baby makes like Elvis and has “left the building.” On those days, I’ll do just about anything to avoid yet another meltdown. So the other day when the Baby was feeling a little less than charming, I decided to make chili for lunch because the Baby loves him some chili. To appease my two boys that don’t share the Baby’s fondness for chili, I planned to make some corn pudding to ladle the chili over–because everyone loves corn pudding, and I really needed a couple of slam dunks that day.

Only the Baby didn’t “want chilwi!” that day. He wanted mac and cheese. I mean really, really, really wanted mac and cheese. He made his position on the matter quite clear. Now, normally I’m not one to change the menu because someone doesn’t like what is being served. You get what I cook. I’d love for you to eat it, but if you choose not to, that’s fine too. The next meal is your next opportunity to eat. I know it may sound harsh, but when cooking for six, I just can’t please everyone all of the time and I’m pretty sure I’d go crazy if I were to try. 😉

But that particular day? I knew that I would lose my ever-lovin’ mind if I had to hear yet another meltdown over something as silly as the lunch menu. If you’ve ever spent a great deal of time with a three year old, then you know what I mean.

The Baby totally won that round. He got his mac and cheese. But since I had my heart set on the corn pudding, I went ahead and threw the corn into the mix. So there! And just so I could spend more time disarming my little fuss-pot by reading Five Little Ducks 37 times in a row, while trying to tickle the crabs right out of him, I tossed all of the ingredients for lunch in the crock pot and hoped for the best. Sometimes that is the Only Way.

The resulting mac and cheese wasn’t the uber-creamy wonder that is my grandmother’s recipe, but it was still very good. The Baby was pleased.

Son #2 liked the Creamed Corn Macaroni and Cheese so much that he ate three bowls before declaring that it was going to be his Birthday Dinner. Next September. Now that’s some high praise in my house! To whip up your own Baby-taming creamed corn macaroni and cheese: Start by draining the can of plain corn before tossing it in the crock pot with the creamed corn and Penne pasta. Add a bit of garlic powder and salt to the crock. It should be noted that the amount of salt needed depends on the type of corn used. I used low-sodium canned corn, so I added more salt than I would have if I’d had a can of full sodium corn. Add the freshly grated cheese and milk to the mix. I know that I always harp on y’all to grate your own cheese and to not use the prepackaged shreds–this time I really mean it! The cheese in this dish is more of a Supporting Player than the Star that is in a traditional macaroni and cheese; therefore, using cheese that will melt and add creaminess to the dish is essential.

Please grate your own cheese. Thanks. 🙂 Cube the butter and add it to the crock. Give everything a good stir to blend the ingredients before popping a lid on it. Set the slow cooker to HIGH. Cook for 2 1/2 hours or until the Penne is soft, but not mushy. Before serving, sprinkle a little extra cheese over top, along with a little freshly cracked pepper.

Then take a deep breath, smile, and dig in to that Creamed Corn Macaroni and Cheese knowing that the day has suddenly taken a sunnier turn for the better. 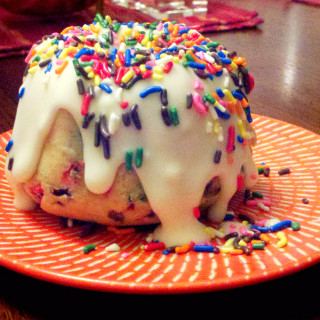