It should shock none of you that I loves me some pie. I’m not all that particular about that obsession either. Savory pies, fruit pies, cream pies, fruit and cream pies -I adore them all! Me and Pie are totally BFF.

One of the cool things that years of being a food blogger has brought me is the discovery that Pie Girls tend to find each other via cyberspace. My sister-from-another-mister, Jeanne, makes some downright drool-worthy pies in her own right. Jeanne changed my life when she taught me the fine art of frying pies in real life. Fried pies, y’all!

Another blog friend, the wicked-smart Jenni Field of Pastry Chef Online makes herself continually available to all over social media. Jenni is such a sweet mix of talent and approachability that we became fast friends. As a trained pastry chef, she doesn’t believe in secret recipes or food snobbery of any kind. In fact, Jenni regularly encourages her fans to be more Fearless in the Kitchen. It was in that pursuit of fearlessness in which Jenni threw down a Chocolate Sable Tart Challenge, complete with wild west music and staged gunfire!

Maybe I’m embellishing a tad on the theatrics, but Jenni really did ask her friends/fans to bake and fill her Chocolate Sable Tart Dough with something delicious to share. Sable is French for sand, meaning that the dough has a crumbly, cookie-like texture that is similar to shortbread. If you can make cookies, you can totally make this pie crust.

I knew immediately that Jenni’s chocolate sable tart dough was practically begging to cradle banana cream pie filling. Being a pastry chef, Jenni is very science-y and technical when it comes to baking. I love that about her. However, I know that not many of my readers want to bother with a kitchen scale. So, when writing the rest of the recipe, I thought it best to convert the weighted measures to the customary US measurements. I tweaked Jenni’s method just a bit too, because I’m a rebel like that.

My filling with Jenni’s adapted crust recipe (with her blessing). Amen. The resulting Chocolate Crust Banana Cream Pie is probably the best that I’ve ever eaten.

The chocolate cookie crust is not overly rich, making it the perfect platform to showcase the sweet vanilla pastry cream with ripe bananas folded inside. I then topped the pie with barely sweetened, freshly whipped cream, and a smattering of crushed toffee bits.

Holy cow! This is some seriously good pie, Friends! The banana flavor really shines through the custard filling, which is further complimented by the whipped cream. The toffee garnish gives the whole affair the slight bite of a banofee pie, without being too much. You need this pie in your life!

Cook’s Notes: Please know that there’s no need to be a hero here! Just as I made the crust recipe a little easier by converting the weighted measures, I have to say that if making homemade pastry cream or pudding isn’t your thing, then a good cook & serve vanilla pudding will do just fine. Do what works for you, so long as it gets you making this pie.

My Impression: I love this pie more than I ever thought possible. While I like a good banana cream pie every once in awhile, they’re usually too rich for me to regularly enjoy. The balance of flavors in this pie between the chocolate crust, sweet custard filling, and the whipped cream and toffee is heavenly.

Family Impression: Even my picky eaters devoured their slice of pie.

Bacon Slayer says chocolate crust banana cream pie is perfect with a strong cup of coffee in the morning. 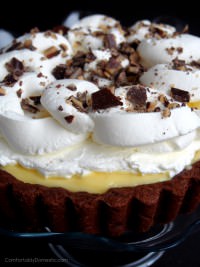 For the Crust:
For the Filling:
For the Topping:

For a more dramatic presentation, bake the pie in a 9-inch tart pan with a removable bottom. Line the bottom of the tart pan with a circle of parchment paper, and spray the interior sides and bottom well with baking spray prior to using. Cool the tart crust in the pan, and then gently run a knife around the perimeter to loosen it prior to removing the shell from the pan. I find it easier to assemble the pie before removing it from a tart pan.

The crust dough is fragile while it bakes, which is what makes it so wonderful after baking. Do not be discouraged if the crust initially sticks when attempting to remove the pie weights; just follow the instructions and allow additional baking time when needed. Place any small bits of dough that may have adhered to the foil back on the crust and continue the recipe as directed. 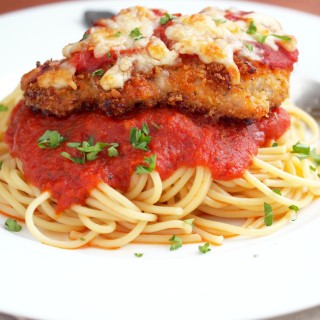 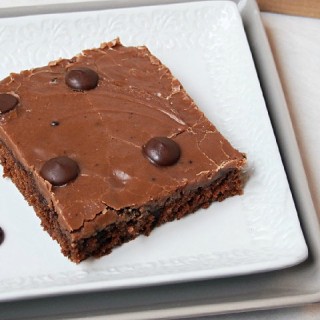