Apple cinnamon rolls are the perfect weekend brunch treat! Warm, gooey cinnamon rolls made with crisp, tart apples in the filling. Serve them as a sticky bun, or adorned with flowing cream cheese icing.

I alluded to being on a major cinnamon roll bender a few weeks ago that I really can’t explain. I can only guess that there’s some sort of freakish-cosmic cinnamon roll energy in the air, because lately I simply can not resist throwing different flavors into a cinnamon roll, just to see what happens. Not that my waistline needs me to be baking dozens of soft, buttery breakfast treats every week, but I just can’t help myself! I can’t get enough cinnamon rolls! I took the Sons on a little field trip recently to our favorite apple orchard. We’ve had such beautifully warm fall weather, that we just had to take a break from school and get out and enjoy it. After picking way more apples than we truly knew what to do with, making enough overnight apple butter to ship to everyone we know, and setting aside a half bushel for pies, I still had a lot of apples to contend with. Which is why I was practically forced to make Apple Cinnamon Rolls! (You should too.)

I have to say, that of all of the various cinnamon rolls fillings that I’ve made as of late, this apple filling is my favorite. So much so that the Sons and I inhaled the first plate of Apple Cinnamon Rolls completely unadorned.

How do you know when you’ve baked something incredible? When you’re willing to snarf down something that’s barely cool enough to handle, let alone eat without singing a few taste buds! Fresh from the oven, they’re soft, sweet, and perfect–somewhat reminiscent of a sticky bun with a little less of the stick-factor. Of course, the best way to cap off any cinnamon roll is with a healthy coat of flowing cream cheese icing, which is exactly what I did with the remaining rolls.

After the Apple Cinnamon Rolls, I can hang up my cinnamon roll baking hat and move on to other tasty treats.

Warm and gooey cinnamon rolls made that much better with the addition of crisp, tart apples in the filling. Serve them as a sticky bun, or adorned with flowing cream cheese icing. For the Dough:
For the Filling:
For the Icing:

For the Dough:
For the Filling:
For the Icing:
To Assemble the Cinnamon Rolls:

Once baked, iced, and cooled, these cinnamon rolls freeze beautifully! Just tightly double-wrap the pie plates with plastic wrap, and then wrap them again with aluminum foil.  Freeze for up to 2 months.  To serve, allow rolls to thaw on the counter overnight, remove the plastic wrap from the pie plate, replace the foil, and reheat them at 325 degrees for about 10 minutes to warm through. 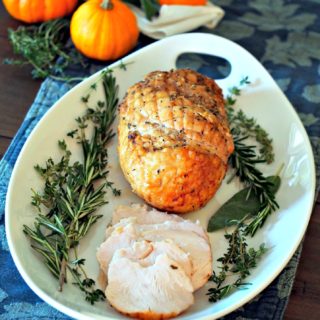 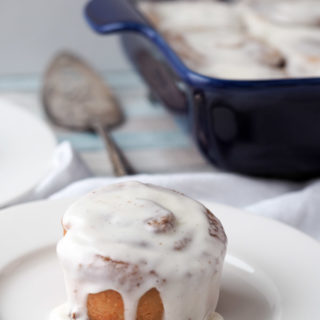