After delving into the power of wheat flours and other flours used in baking, I thought it might be helpful to explore a few other whole grains.  I’m going to focus on a couple of whole grains that have made their way through my kitchen at one point or another, and highlight the really tasty ones that are pantry staples.  The beauty of these particular whole grains is that they are versatile enough to eat as hot cereal/porridge, puddings, side dishes, and either whole or ground flour as an addition to baked goods.

A grain believed to originate in the mountainous regions of Asia nearly 6000 years ago, buckwheat is an ancient grain.  Explorers liked to carry buckwheat while traveling because it thrives in extreme conditions, which can be helpful when venturing into uncharted territory.  Buckwheat is incredibly hardy, doing well in cold, wet conditions provided the soil has adequate drainage.  To give you an idea of the heartiness of buckwheat, there is a single variety of the grain that can be found growing in the Arctic, and in the Himalayan Mountains in conditions where few other plants can survive.

Contrary to what the name implies, buckwheat is not a wheat grass at all, but more closely related to rhubarb.  In fact, the buckwheat kernel is actually a fruit seed.  For clarity purposes, I’m going to lump in into the grain category with the rest of the world.  The name “buckwheat” is likely derived from the Dutch boecweit, meaning “beech wheat” because the kernel resembles the color and shape of the three-sided beech nut.  As with many grains, the hull of the buckwheat kernel is tough and must be removed prior to eating.  It is that tough outer hull that makes buckwheat very resistant to insects; that coupled with natural weed killing properties make it an ideal organic crop.  Nutritionally, it has twice as many B vitamins as wheat, and is also high in magnesium.

Buckwheat flour is commonly used for pastries, or as cereal throughout Europe.  The most familiar American application is Buckwheat Pancakes, or their smaller, usually savory Russian cousin, the blini—both are dark-brown-almost-black in color.  Raw buckwheat has a nutty flavor, while toasted buckwheat has a strong, earthy, almost tannic flavor.  Buckwheat has no gluten, so it must be combined with high gluten flour for use in baking.  A 1:3 ratio of buckwheat flour to bread flour works well.

I’ll be honest—the first time I bought buckwheat flour was because it reminded me of the character on an old television show called The Little Rascals.  Actually, it reminded me of Eddie Murphy’s Saturday Night Live spoof on The Little Rascals character, but that is about as relevant as the rest of this tangent.  Suffice it to say that if I see something on the grocery store shelves that makes me laugh, I’ll probably buy it on impulse.  I am the Humor Demographic.  Regardless of my motivation, buckwheat flour makes a darn fine pancake if you like your flapjacks on the robust and earthy side.

Storage:  Buckwheat goes rancid quickly, so it should be kept in an air-tight container in the freezer.  Buckwheat flour should be used within two months of purchase.

Who doesn’t like rice, right?  Like buckwheat, rice is also an ancient grain that has seemingly been around since the dawn of time.  Now as was then, rice serves as a staple crop for the majority of the world’s population.  Rice is such a focal point of Asian diets that in some countries, the verb “to eat” translates to “to eat rice.”  In China the word for “agriculture” is “rice,” which suggests that the language was developing at the same time as rice cultivation.  Thousands of species of rice are prevalent around the world; however, the most common variety that usually comes to mind is white rice.

As is the case with wheat, white rice is actually brown rice which has been processed to remove the nutritious bran and germ.  White rice must be enriched (read: sprayed) with vitamins to prevent vitamin deficiencies for those cultures in which it is a dietary staple.  Enrichment sounds like a great idea, but it should be noted that most of the vitamins sprayed on the rice are washed away when the rice is rinsed before cooking.  Brown rice is a little higher in protein than white rice because it still contains the germ, bran, and endosperm, although it is significantly higher in fiber, B vitamins, iron, and magnesium.  Brown rice has a nuttier flavor and chewier texture than its white counterpart; it is also a great complex carbohydrate as it is digested more slowly than white rice.  Lastly, rice is the most digestible protein in the grain world, and the least allergenic.  (Let’s hear it for rice, woo-hoo!)

You know…if you’re into that sort of thing.  Which I am…  I grew up eating brown rice, so it is my preference.  But my family?  Let’s just say that they’re a little more reluctant to embrace the chewy goodness.  They much prefer jasmine or other white rice, but if I doctor up the brown rice with enough chicken broth and butter, they’ll eat it without too much complaint.

Although rice flour doesn’t contain any gluten, it is a staple baking ingredient in many cultures.  With the emergence of wheat and other food intolerances, rice flour serves as a basis for many gluten-free and dairy-free products.  Rice flour works well in noodles and shortbread, but the crumbly finished-texture and lack of gluten doesn’t work as well with yeast breads unless mixed with wheat-based flours and/or stabilizers.

Storage:  Rice can be stored in an airtight container at room temperature for several months.  Due to a tragic insect infestation I experienced once after buying bulk rice, I always freeze rice for a few days after purchase before storing it back at room temperature.  Why you ask?  Freezing rice will take care of any insect larvae that may hitched a ride on the grains.  (Just go to your little happy place and try not to think about that…)

Another hardy grain that thrives in extreme conditions such as those found in the Himalayans, Amaranth is a tiny seed that contains the highest amount of protein of all of the whole grains. 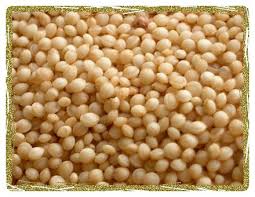 Amaranth flour contains no gluten, so it doesn’t do well as the sole flour in yeasted breads, but is often used as a component of pastas and gluten-free baked goods, as texturally it mimics some characteristics of all-purpose flour.

Storage: The high oil content of amaranth makes it susceptible to rancidity, so amaranth flour should be kept in an airtight container in the refrigerator and used quickly.

Perhaps one of my favorite Other Grains is actually a seed indigenous to South America.  Quinoa (pronounced KEEN-wah) is also remarkably hardy, able to grow in poor soil and at high elevations.  I like quinoa for both the taste and the exceptional protein content—which is around 20%–making it the protein-powerhouse of the grain world.  Quinoa doesn’t have any gluten, so it is an excellent option for those on gluten-free diets.  Quinoa posesses a natural, soapy-tasting saponin coating which makes it pest resistant by repelling birds and insects with its bitter taste.  Luckily, most of the saponin is removed during processing but it’s a good idea to rinse off the remaining traces with cool water before cooking.

Quinoa has a mild flavor and is usually eaten in pilafs or as a cereal.  Quinoa flour is becoming increasingly popular in baked goods for its nutritional content.

Once considered a sacred grain in Chinese culture, millet is a general term for a number of grains found around the world.  The flavor of millet varies widely depending on the variety, but the species found most commonly in the US has a mild, nutty, slightly sweet flavor.

As it is non-allergenic and easy to digest, millet is a popular baby food component in many parts of the world.  Millet is often cooked in cereals/porridges, or pilafs, but the gluten-free millet flour is gaining popularity in flatbreads.

Just in case you are inspired to cook with whole grains, the nice folks at King Arthur Flour were kind enough to draw up a handy chart to get you started.  Remember, this partial list contains general guidelines, and should not be considered all-inclusive.

Greek Quinoa Salad is a summer staple in our house, as it makes a great lunch, picnic accessory, and pairs beautifully with grilled chicken or other grilled meats.